How to Create Drop Shadow in Photoshop: Tutorial

How to make a white background in Photoshop | Pure White Background

Cut Out Image from Background Photoshop

How to Create Drop Shadow in Photoshop

Drop shadow is a kind of process of adding an effect to an image by using photoshop. We found here how to create drop shadow in photoshop using different products and used in eCommerce websites, newspapers, amazon stores, leaflets, and magazines. An image with an object is looking ugly, and this is not natural looking. So, you need to remove an object from the product and add a realistic shadow behind your image.

Following modern technology to achieve the best work for the customer, drop shadow service is one of the best ways to make your image realistic and natural. In a world, it is a creative solution by using adobe photoshop and setting up the production image in the proper position with the help of the right graphic designer.

Today, I’m going to show you how to create drop shadow in photoshop and hope it’s helpful for you. I tried to capture A to Z solution but if you sometimes need someone photoshop shadow expert, then let’s start.

Type of Shadow Which you find on the product

Drop shadow brings an ideal solution when it comes to digital photos. The advanced photoshop techniques help you to make drop shadow, natural shadow, and reflection shadow. Shadow mainly use the purposes of post image on any e-commerce website and online store. You should make your image with a high resolution before posting anywhere.

The drop shadow effect meant effect shadow creating naturally by using photoshop. It is hard to choose the proper alignment of shadow. It is usually decided left to right for the image to look professional and realistic. It is hard to create a shadow for a delicate item like hair, but the difficult job tells in detail, however with a large of expert services available, one can depend on the chosen service.

The quality of the drop shadow effect depends on how the shadow is combined and how a man makes it smoothly. A proper drop shadow must have no isolated and no object. It proves that a drop shadow provides a magical appeal to the photograph.

Realistic photograph: You can ready your image by giving a drop shadow in photoshop and making your photo more lucrative.

Improve Quality: Improve the quality of your image; it is most important to create a drop shadow by removing the background from your image and making it smoother.

. Drop shadows are ugly and not refreshing anymore

There are two types of famous shadows in photoshop, like cast shadow and form shadow.

Now you can ask me what the cast shadow is and what is the form shadow.

The term of form shadow is a reflection on an object or under the product. For any photo, this is not mandatory that the form was in a fixed position its looks like a natural shadow, which was different from the cast shadow.

The difference between drop shadow vs cast shadow.

Adding a realistic shadow is an appropriate process. On the other hand, adding a drop shadow is more accessible than the natural shadow.

A drop shadow is a rough presentation of a shadow containing a similar size, process, and dimension. So, adjust your image with dimension cast shadow; it is essential to follow the procedure given below.

Are you looking for a quick process? Create drop shadow on your production image or photo. Well, if yes, then you are here at the right place. Because photoshop drops the shadow process here, I describe it part by part. Here you will get knowledge about shadow-making services for photographers and eCommerce business owners to increase sales.

A short view to create drop Shadow in Photoshop

. Separate your object from the background by using the clipping path service

. Add a new background behind your isolated object

. Drag or click the brush on the drop shadow

Tutorial: How to Create Drop Shadow in Photoshop

Step by step process of this tutorial is given below

Step 1: Open the image in photoshop, which you need to add shadow. Firstly, clipping path or removing the background by using photoshop pen tools or other processes. 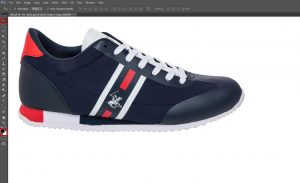 You can read our other blogs related to this.

Step 2: The layer should look like 0 as per the given photo. Layer 0 is filled with a white coating, and layer 1 shows the main products. 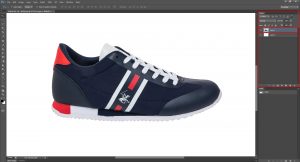 Step 3: Make a copy by selecting layer 1 with the keyboard (CTRL+J) 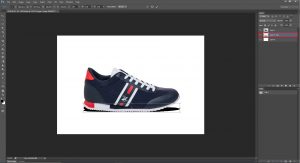 Step 4: Make sure the image default color is okay. If not okay, then click (Shift+X) to change your color default. 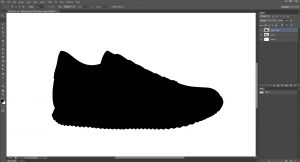 Step 6: Then bring free transform on the image by pressing (CTRL+T) 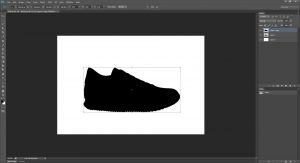 Step 7: To make a shadow under the products, click the top middle square and drug the black image straight down.

Step 8: Now press enters to get out from free transform. 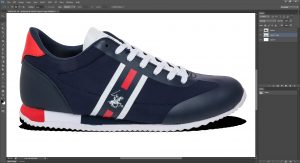 Step 9: Move the shadow layer by dragging it below the image layer so that the coating is under the shoe layer. 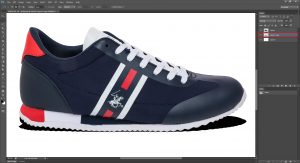 Step 10: Select the layer of shadow and go to Filter>Blur>Motion Blur to fix the shadow angle. 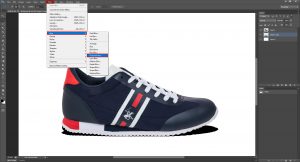 Step 11: Adjust the distance and set the angle 0 adjust the space enough to smooth out around the shadow you create. 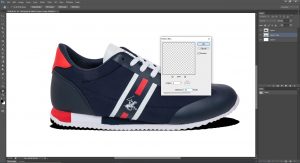 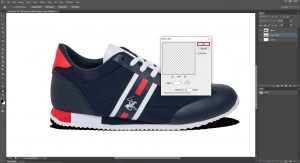 Step 13: At this step, you should go to the same option and not go motion blur; this time, you should Filter>Blur>Gaussian blur 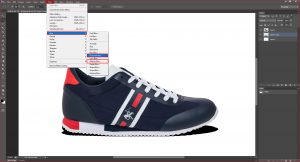 Step 14: Change the radius into 3 pixels and click okay

Step 15: Make sure that the drop shadow layer is selected and then Add layer mask as like as the image below 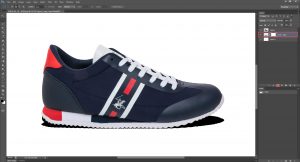 Step 16: Select the brush tools from the left menu bar and change the opacity to around 53%. You can high or lower the opacity as necessary, but we recommend it as the middle of the opacity option. 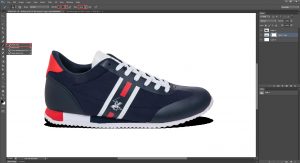 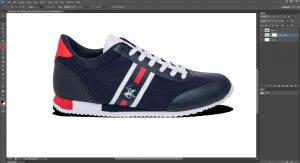 Step 18: You can change the brush size from here and do that. 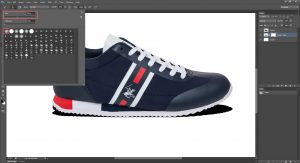 Step 19: Smoothly drag or click on the drop shadow to make it perfect. If you need to bring back the, change the foreground color pressing (SHIFT+X) and click the over area. 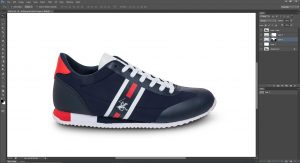 Step 20: Select the move tools to adjust the shadow. 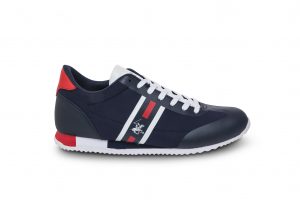 Shadow in eCommerce: When to use drop shadow?

Adding shadow into product images is a process. Adding the advanced drop shadow process, you can make your photo professional-looking and authentic. In our e-commerce image editing service, you need to create a shadow.

If you were displaying a product on white background with drop shadow, it helps your product increase sales and grows your business.

Here is the example where you find a shadow and attach a shadow on furniture products.